Menu
Guernsey handling classes and calf classes.
Entries a little short on the day, but handlers and calves put on a good show.
In the handling classes, Michael Dawes was crowned Champion Guernsey handler with Bea Hooper in reserve (pictured below). Also handling this evening were Oscar Turner, Oswald Loader James Bottom and Katrina Nightingale. 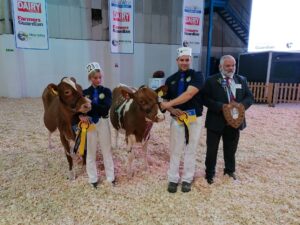 In the calf classes, Michael Dawes won first prize in the Any other dairy breed class with Edgehill Coin Freda 3.
Also competing in these strong classes along side, Ayrshires, British Friesian and Brown Swiss were, Abi Marshall with Autumn Gold Little Lady Duchess, Digby Gribble with Chiddingstone Arthur’s Jubilee and Richard Norman and Polly Whethams Emma Eve Dean Bijou. These four went on to compete in the Guernsey calf Championship, with Abi Marshalls calf taking the championship (pictured below) with Michael Dawes in reserve . 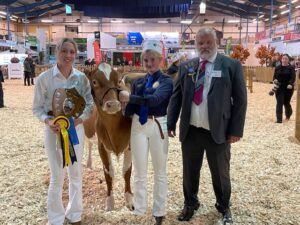