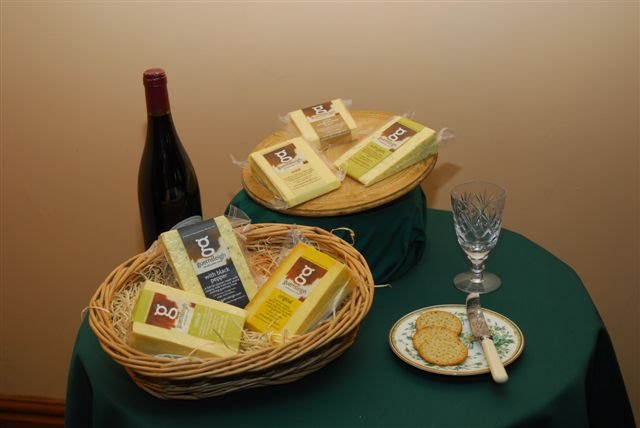 Ernie Durose and his mother Mrs Edith Durose, from Grange Farm Lower Leigh, Staffordshire have been developing a cheese business steadily using their Guernsey milk from their Leighgrange Guernseys.

The milk had been used by the Co-op dairy at nearby Fole, until the Co-op processing businesses were taken over by Dairy Farmers of Britain.

Ernie like so many others found himself with a “white water” contract after the collapse of Dairy Farmers of Britain and because of the relatively small size of the herd (80 cows) hit by punitive volume adjustments.

Ernie attended the Reaseheath Cheese course and initially used a third party to process his milk into a range of mature cheddar type cheeses, which he would sell at Farmers Markets and through local “delis” etc. The feedback from his customers gave him the confidence to make the investment in his own cheese room and store, doing a lot of the work himself, the main reason was the need to allow his hard cheese to mature for a longer period and thus fully develop.

An approach from another Guernsey herd owner, who has also been using a third party cheese maker to make a “Brie” type soft cheese, has led to the introduction of a soft cheese this summer and this is made on one day a week with half of that days production sold under the successful established brand and the other half sold by Ernie under his Guernsleigh brand.

The opportunity arose in the spring to supply milk to Wisemans for the new A2UK milk brand which is now available in the shops, Ernie hosted a meeting at Grange Farm at the end of the April 2012, when Wisemans outlined the opportunity and all of those who attended took up the option of having their cows sampled.

Wisemans paid for the sampling and revealed the percentage of the cows that were A2xA2 (78% to 88% across the five herds sampled). Ernie had 14 animals tested A1xA2 and these were sold to join the expanding Hartland View herd of Andrew and Debbie Lewis in Devon where the milk is pooled with that of their large Holstein herd and there is no current likelihood of an A2 contract.

Interestingly 7 of the 14 were sired by a natural service sire who himself was a twin and his twin tested to be A2xA2 whilst he was A1xA2. Ernie also had one family that had been graded up to Guernsey and that family all were A1 xA2.

He has since added 6 A2 xA2 tested in calf heifers from Summerhill and this last week was able to add 18 cows from the Hamps Valley herd of Don and Kath Salt who were tested in the summer by Wisemans but did not take up the A2 opportunity. Ernie was able to buy 2 Ex classified cows from the Fiona and Tipsy families and all bar 2 of the other 16 were classified to be good plus or better as heifers.

The A2 opportunity has allowed Ernie to milk an extra 10 cows and his October milk price was 14 pence per litre better than October 2011, from a combination of the A2 premium, better than average quality on the butterfat based payment system used by Wisemans, a Channel Island premium offered after EGCS met with Wisemans/A2 Corp to reflect the extra Protein in Guernsey milk which is thought to be an important reason for the success of A2 in Australia, where competing milks are ”standardised” ie. have lower protein levels than A2 milk.

An important side affect is that at present Guernsleigh cheese is the only A2 cheese in the market place, and with the Wiseman milk price guaranteed for the first two years that allows time to develop the cheese sales from the farm.